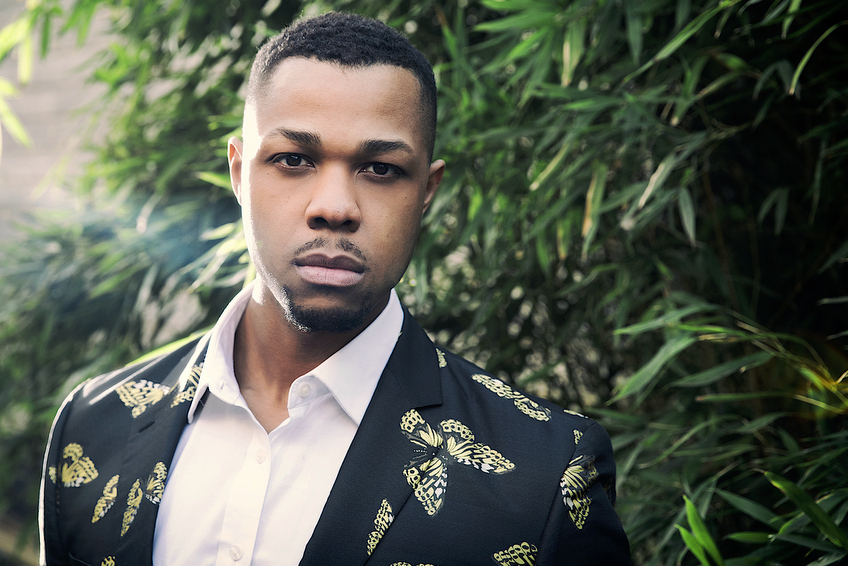 Bass-baritone Davóne Tines comes to Houston on Tuesday, January 25 to perform his Recital No. 1: MASS, with Lester Green at the piano. Tines spoke with journalist Fergus McIntosh about this program.

You’ve chosen an unconventional format for this recital. Why?

This recital has technically been about six years in the making, and it’s involved a lot of exploration. It took me a long time to get to the point of wanting to give a traditional performance standing in the crook of a piano. I approached the recital situation with a sort of a phobia, or an allergic reaction to doing what I think I’ve seen a lot of singers do, which is to program something based off of a model that they aren’t fully engaged in, filling in the template with music that simply checked boxes and didn’t articulate their own feelings and experience in an explicit way. I think this idea of explicit context is critical: in order to perform well, these things need to be in the front of your mind, for every single note.

This program is structured around Christian liturgy. Is that your explicit context?

It’s definitely part of it. There’s always been a prominent religious thread through my music making. As a child, singing was all religious or liturgical, and all in a choral setting, with close family and friends. Everyone in my family participated in choir, including my grandfather, who was in the Navy for thirty years and now directs two church choirs. He’s the one who noticed I had a unique voice and thought that I should do something further to develop it and figure it out. In high school, I did musicals, and in college at Harvard I sang in a choir and conducted an a cappella group—we did a lot of Renaissance polyphony, which was a bit nerdy even for Harvard, but really fun at the time. And then, before and during grad school, I had church choir jobs, first at the Catholic National Shrine in Washington, and then at the Greek Orthodox cathedral here in New York. So I’ve had this long association with being able to support myself through music making, which is part of the larger musical tradition in terms of musicians, like Bach, being connected to and patronized by the church, especially in the Baroque period. In some ways, my involvement in music is just a continuation of that larger world tradition.

I once heard you sing Beethoven’s Ode to Joy, and follow it up with Lauryn Hill’s rendition of the hymn Joyful, Joyful from Sister Act 2. What draws them together?

Well, in that case it’s really the same music! But my actual lived experience with liturgical music has had all of these flavors, so this recital is an opportunity for me to put all of that in one place and kind of have that conversation in front of people. It also very much dictates the interpretative choices I’ll make. I want to unify the aesthetic through which I perform, and that might lead to some choices within Bach that are very nonstandard, like certain glissandi or certain ways of emphasizing phrases that are not from the traditional performance practice. I’ve really enjoyed being able to approach gospel singing with a classical technique, as well. It allows a whole different variety of color options.

You came to singing, as a profession, relatively late, and you’ve risen quickly. How has that experience shaped your musicianship?

Leaving Harvard, I didn’t know how to make a career in performing and it wasn’t exactly my focus. So I worked in arts administration in a really intensive way for a lot of different organizations. That was an extremely valuable experience because it taught me all the different angles of how music is made, artistically and professionally, and also how it’s supported administratively. Seeing the inner workings of how things actually were moved from conception to reality really galvanized my thought around what I now refer to as creative pragmatism: being excited about having an idea, and very clearly knowing the path to bring that idea to fruition. I think that extended experience was very much a part of why I’ve become a maker as well as a musician.

You’ve made some amazing things—but we almost missed out on hearing you sing!

In the end I kind of dared myself to audition for Yale and Julliard. If I got into either of those, that’s what I would do, and if I didn’t, then I would apply to business school. I didn’t get into Yale, for the second time—they rejected me in undergrad as well—but I did get into Juilliard. Then at Juilliard, I spent a lot of time trying to truthfully justify and wrap my head around why I was singing certain repertoire, certain German lieder or what have you. There was this disconnect between my sense of self and the idea that I would be trying to present a story of, you know, falling in love with some maiden that had shunned me and then dying in agony. I didn’t feel a direct connection to that. I wanted a one-to-one relationship between my own experience and what I was putting out in front of people. Now I think in order to inhabit a role that someone has created, or to perform something as a kind of vessel or a tool of a composer, you have to identify the differences between yourself and the piece. It’s only once those have been explicitly explored and understood that you can see the connections.

I’m guessing that you do feel a direct connection to the music you’re singing here.

Just as The Black Clown—the show I created with composer Michael Schachter and director Zack Winokur, who I consider my art husband—was an articulation of the African-American experience, this program serves as an exploration of my own connection to spirituality.

Do you conceive of your “MASS” as a dramatic project?

I conceive of every single appearance that I make as being of a dramatic ilk, because I think the ultimate goal of music making, period, is storytelling. That’s how society holds a mirror up to itself and sees what it is. Everything that I think is successful in terms of human engagement has to deal with narrative. So figuring out the underpinning dramaturgy, figuring out what the story is, and basing the explication of the music on top of that is essential. I do that sort of thinking for every single performance.

You’ve named the sections of your recital after parts of the mass, but you’ve changed the order. Why is that?

My great friend and colleague Gus Chrysson—who directed that Greek Orthodox choir and then ended up becoming an Episcopal priest—told me that I’m basically queering the mass, queering in the broad sense of bending it to my own understanding. So, the order I’m using here, and which Caroline Shaw has followed in her miniature mass, accords with my own understanding of a spiritual journey, beginning with the Kyrie, which begs for mercy, and then the Agnus Dei, which represents the possibility for change, but only through death. There’s the affirmation of the Credo and the exaltation of the Gloria. The Sanctus is a moment of meditation. And then the Benedictus has this very simple text, “Where there is darkness, he will bring light.” That’s the entire recital right there: present the darkness, and show the change into light.

How did that blessing, the piece you’ve called VIGIL, come about?

I was in Amsterdam in the fall of 2019 and Igee Dieudonné and I just fell into this mode of having exploratory sessions, very late into the evening, where we would kind of set a style and improvise from there. VIGIL came out of an exploration of Faure. When Igee started to play, those were the first words that came to mind, along with this extremely simple melody, which to me is a combination of Faure and gospel music. It was a kind of transcendent moment.

Do you believe in God? What does God mean to you?

I believe in God, definitely. I think it’s very complicated. The African-American connection to Christianity is very complex because it’s essentially a religion that was forcibly introduced to a population of people that had their own beliefs systems and history and spiritual lore. That’s been a part of my own journey, understanding what it means for black people to engage with a religious system that was essentially colonized upon them. What I’ve realized is that the way that I, and the way that I think a lot of black people, engage with the Christian ideals is in the realm of metaphor. And that’s connected to my own music making: I’m utilizing these ideas or paradigms that people can understand symbolically, and attaching personal experience to them.

Is that why the new work Tyshawn Sorey has written for you is titled “Songs of Death”?

It’s a setting of three familiar spirituals, but on the score Sorey writes that he has “re-composed” the tunes.

I had this realization that a lot of spirituals are essentially code for suicide notes. “Swing Low, Sweet Chariot,” for example, is someone begging God to kill them, to “carry me home.” There’s a very important Langston Hughes poem called Suicide’s Note, just one line. It says:

The calm,
Cool face of the river
asked me for a kiss.

Hughes, in his time, directly connected to the possibility of these spirituals being suicidal, and I really wanted to show audiences another side of these songs. I think a lot of times spirituals are misunderstood, heard as happy songs or being just about praising the Lord or what have you. But these are songs that were created by people in extraordinary circumstances, and they’re amazing, metaphorical expressions of real faith. Sorey’s task was to break the songs out of the aesthetic that we understand them within, so that the text and the ideas behind the text could become more apparent.

Do you think that standard interpretation of spirituals, the way that they’ve been positioned in society, is oppressive?

Yes, because it lobs off the more detailed and faceted reality of these pieces, these artifacts, and life doesn’t work that way: you can’t really engage with something just on one plane. I’m inspired by the Julius Eastman piece I’m singing, which connects ideals of revolution across the centuries, between a twentieth-century, Black, gay composer and Joan of Arc. She’s visited by the saints—there’s an incredible painting of this in the Metropolitan Museum by Jules Bastien-Lepage, by the way—and they tell her, “Joan, when they question you, speak boldly.”

The power of declamation.

Exactly. And what I have to say, the experience I have to share, has been comprised of all of these things: early music, Bach, contemporary gospel, and also new music. When you put these seemingly different things together and acknowledge the connections between them, you have to acknowledge that there’s something shared among these composers. There’s something that is shared among all people.