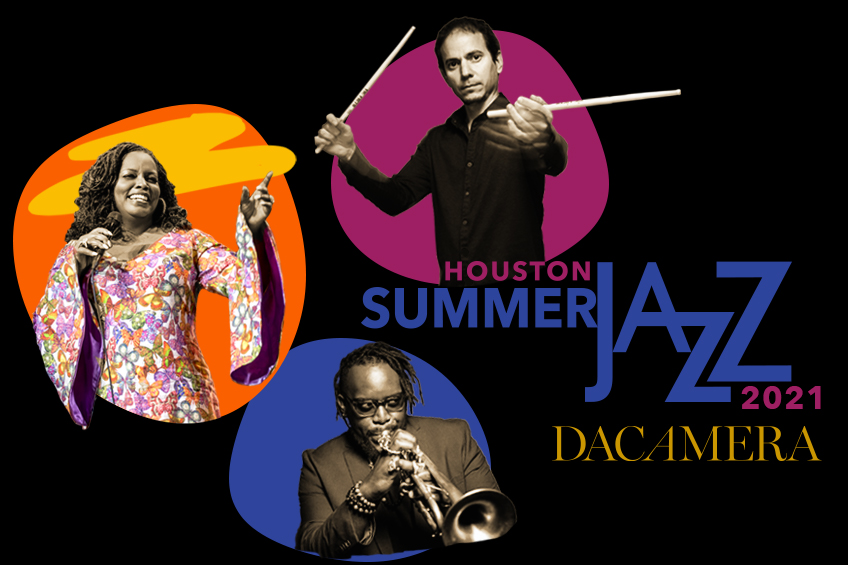 DACAMERA returns to the downtown Theater District from August 20 to 22, 2021, for HOUSTON SUMMERJAZZ. Made possible in part by the Texas Commission on the Arts’ Cultural Districts Program, the festival will celebrate jazz with a series of safe, socially-distant concerts at Wortham Theater Center’s Brown Theater, that will also be available for online streaming. Featuring legendary vocalist Dianne Reeves, Dafnis Prieto’s Grammy-winning Latin jazz big band and star trumpeter Marquis Hill, DACAMERA’s powerful lineup will serve as a prelude to its upcoming 2021/2022 season. DACAMERA will also celebrate local Houston talent with free downtown performances throughout the weekend, with more details to be announced.

SUMMERJAZZ kicks off with a performance by Dianne Reeves on Friday, August 20 at 8 p.m. Reeves is the pre-eminent jazz vocalist in the world today, with an arsenal of talents and a limitless repertoire. As a result of her virtuosity, improvisational prowess and unique jazz and R&B stylings, Reeves has received five Grammy Awards for Best Jazz Vocal Album and an honorary doctorate of music from Julliard, and was recently named a 2018 National Endowment of the Arts Jazz Master.

The festival continues on Saturday, August 21 at 8 p.m. with Dafnis Prieto Big Band. Cuban drummer Dafnis Prieto won the 2018 Grammy Award for Best Latin Jazz album for Back to the Sunset, a recording with his newest project, the Dafnis Prieto Big Band. The editors of DownBeat called the album “one of the best recordings of the year.” Since making his DACAMERA debut in 2009 and earning a MacArthur “Genius” grant in 2011, Prieto has racked up rave reviews, prestigious commissions and multiple Grammy and Latin Grammy nominations.

A performance by Marquis Hill concludes the SUMMERJAZZ on Sunday, August 22 at 3 p.m. Since his first DACAMERA appearance in 2017, the Chicago native trumpeter has become a breakout star. Hill’s 2019 recording, Love Tape, was named a Best of 2019 in The New York Times. In Houston, Hill will revisit his early recording New Gospel with an exceptional lineup featuring two fellow Chicagoans, vibraphonist Joel Ross and bass player Junius Paul, and two Houston natives, saxophonist Walter Smith III and drummer Kendrick Scott.

Festival passes and single tickets will go on sale in the coming weeks. To be notified when tickets go on sale, click here to join DACAMERA’s email list.