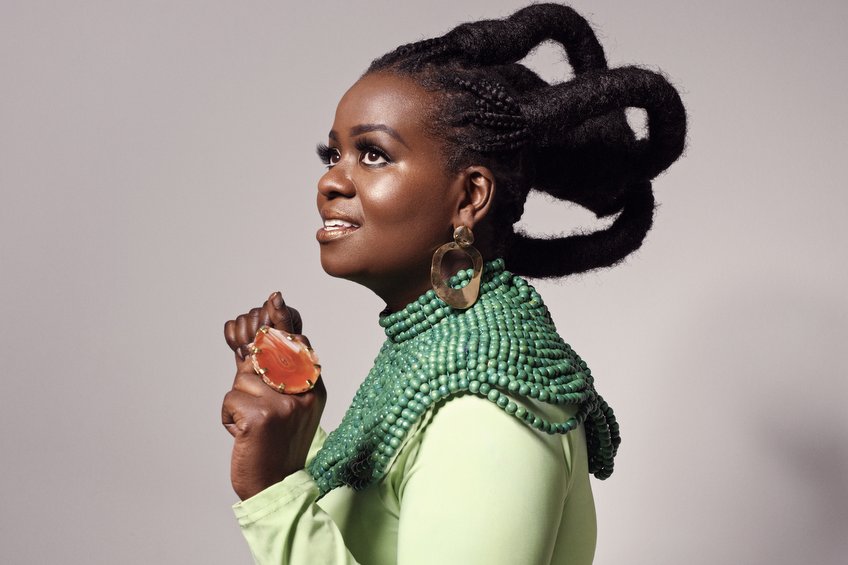 On September 10 at 8:00 PM, DACAMERA presents jazz vocalist Somi in a free performance at Miller Outdoor Theatre, a tribute to ‘Mama Afrika’ Miriam Makeba. Somi presents Zenzile: The Reimagination of Miriam Makeba, a deeply personal tribute to the legendary, groundbreaking South African singer and activist who turned 31 years of exile imposed on her by the apartheid regime in her native country into a career of global triumph and influence. A Grammy Award winner, Makeba became known as ‘Mama Afrika’ and was perhaps best known for the song Pata Pata, which she co-wrote with the American songwriter Jerry Ragovoy.

Tickets for the covered area will be available here beginning September 9 at 10:00 AM. The performance is sponsored in part by the City of Houston through the Miller Theatre Advisory Board.

Some musicians benefit from a deep connection with the place and traditions into which they are born. Others find who they are on extended journeys, connecting with sounds that are foreign yet inherently familiar. Somi Kakoma —the vocalist, composer, and writer born in Illinois to parents who emigrated from Rwanda and Uganda—discovered her musical identity traversing the cultural bridge between America and Africa. That sense of discovery continues to guide a career in which she has forged a musical signature, channeling the jazz, soul, and the music of her roots.

Zenzile: The Reimagination of Miriam Makeba is a companion project to an original musical (also about Miriam Makeba) that Somi wrote called Dreaming Zenzile. Both of them arrive on the tails of a critically acclaimed live album. Holy Room – Live at Alte Oper with Frankfurt Radio Big Band (Salon Africana 2020) was released shortly after the onset of the COVID-19 pandemic and ultimately earned her a 2021 Grammy® nomination for Best Jazz Vocal Album. With that nomination, Somi became the first African woman ever nominated in any of the Grammy® jazz categories. The album also won the 2021 NAACP Image Award for Outstanding Jazz Vocal Album.

Her previous studio album Petite Afrique was a daring, relevant, refashioning of what “jazz” and “African music” mean – both singularly and to each other. The album, which tells the story of African immigrants in the midst of a gentrified Harlem in New York City, won the 2018 NAACP Image Award for Outstanding Jazz Album and featured special guest Aloe Blacc. Petite Afrique was the highly anticipated follow-up to Somi’s major

label debut The Lagos Music Salon which was inspired by an 18-month creative sabbatical in Lagos, Nigeria and features special guests Angelique Kidjo and Common landed at #1 on US and international Jazz charts. Straddling the worlds of African jazz, soul, and pop, Both albums earned her ECHO Award nominations in Germany for Best International Jazz Vocalist.

Closely mentored by the legendary trumpet player Hugh Masekela, Somi’s live performance was described by JazzTimes magazine as “the earthy gutsiness of Nina Simone blended with the vocal beauty of Dianne Reeves.” Somi is a Soros Equality Fellow, a USA Doris Duke Fellow, a TED Senior Fellow, a Sundance Theatre Fellow, and a former artist-in-residence at Park Avenue Armory, the Robert Rauschenberg Foundation, Baryshnikov Arts Center and UCLA’s Center for the Art of Performance. She is also the founder of Salon Africana, a boutique cultural agency and record label. Often celebrated for her activism, Secretary General Ban Ki-Moon asked Somi to perform at the United Nations’ General Assembly in commemoration of the International Day of Remembrance of the Victims of Slavery and the Transatlantic Slave Trade. She was also invited to perform at Carnegie Hall alongside Hugh Masekela, Dave Matthews, and Vusi Mahlesela in celebration of South African democracy. In 2018, In her heart of hearts, she is an East African Midwestern girl who loves family, poetry, and freedom.