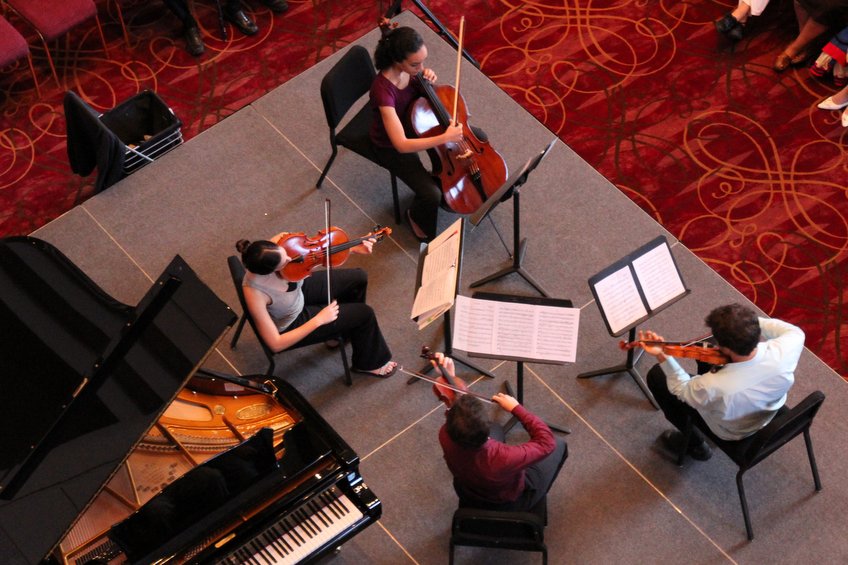 DACAMERA’s next A Little Day Music concert, at noon on Wednesday, November 3, explores features music that explores the night sky, and centers around works by Australian composers. We begin, appropriately, with a selection of Chopin’s Nocturnes — perhaps the best known “night music” — before turning to the work of contemporary and 20th century composers from Australian and Tasmania. The concert is presented in partnership with the Australian Consulate-General Houston.

Nick Russoniello is a highly accomplished saxophonist and composer with an exciting career both in Australia and abroad. Nick has been the recipient of a number of major awards including the ABC Symphony Australia Young Performer of the Year Award and the Fine Music Kruger Scholarship. Haunting and lyrical, Dawn Searching is inspired by bird song and showcases the beautiful tone color of the soprano saxophone.

One of Australia’s best known and most performed composers, Ross Edwards has created a distinctive sound world aligned with principles of deep ecology while seeking to reconnect music with elemental forces and restore its traditional association with ritual and dance. About his piece Binyang for clarinet and percussion, he writes, “Captivated by a persistent and strikingly melodic birdcall I derived from it the scale underlying Binyang...Binyang means ‘bird’ in the now defunct Sydney Aboriginal language. The identity of the bird remains a mystery, my whistling it over the phone to ornithologists having left them stumped.”

Australian Saxophonist and composer, Barry Cockcroft’s music has received thousands of performances throughout the world and is played regularly in more than 50 countries. His music is repeatedly programmed by some of the world’s finest musicians. About his piece Ku Ku, he writes:

“I had been studying in France and one of the last pieces that I performed was Berio’s Sequenza VIIb for soprano saxophone. As I tend to do when practicing, I improvised around the themes of the piece. I often found that to contrast the extreme nature of the Sequenza I would play long melodic lines. To contrast further with this, I would take some of the multiphonics used by Berio and add some funky rhythms. When a friend kindly told me that I sounded like a chicken it was amusing to extend on this idea…Ku Ku remains my most widely played composition after Black & Blue. Ignoring the spelling apparently: Kuku in Swahili means chicken. Ku-ku is a type of clock made in the Black forest. Ku Ku means crazy.”

The late Australian composer Peter Sculthorpe was elected one of Australia’s Living National Treasures in 1998 and was recipient of a Silver Jubilee Medal. He was an Honorary Foreign Life Member of the American Academy of Arts and Letters. About his 1995 piece Night Song, Sculthorpe notes:

“This work is an arrangement of the central part of Love 200 (1970), for rock band and orchestra. It acts as a nocturne-like slow movement, the only part of the work in which the rock band is silent. In this arrangement, the solo violin follows the original vocal line, which is concerned with solitary thoughts at night, while becalmed on a distant sea.”