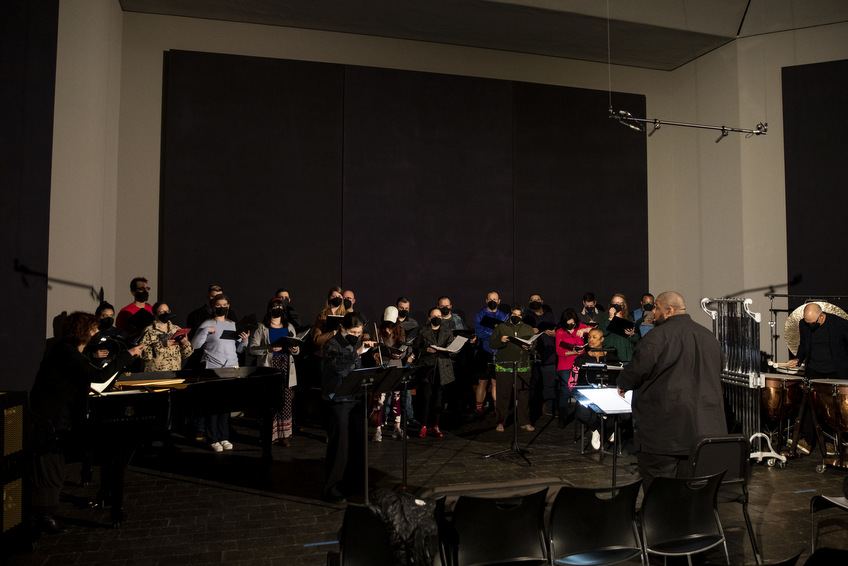 The New York Times names the Houston premiere of Tyshawn Sorey‘s Monochromatic Light (Afterlife) as one of the best performances of the year. Commissioned by DACAMERA and Rothko Chapel in celebration of the Chapel’s fiftieth anniversary, Sorey’s piece had its sold-out, world-premiere performances at the Chapel in February, performed by Davóne Tines, bass baritone; Kim Kashkashian, viola; Steven Schick, percussion; Sarah Rothenberg, piano and celesta; and Houston Chamber Choir.

“Rarely does a composer present a new work haunted so openly and pervasively by a predecessor’s,” wrote Zachary Woolfe in his Times review. “But Monochromatic Light feels less like a nostalgia trip than a broadening of [Morton] Feldman’s path deep into the pain and community of our time and the distant but resonant past.”

Read the New York Times review of the premiere.

Alex Ross of The New Yorker names the premiere as one of the most notable performances of the year.

In his review, Ross wrote, “Sarah Rothenberg assembled a brilliant group of performers…The violist was the searingly expressive Kim Kashkashian, perhaps the finest living exponent of her instrument. This could also be said of Steven Schick, who played percussion. The Houston Chamber Choir maintained eerie precision, as did
Rothenberg herself, at the piano and the celesta. The vocal soloist was the masterly bass-baritone Davóne Tines.”